There are several methods for delivering daily insulin doses to manage type 1 diabetes. The most often prescribed being an insulin pump. While this method is widely considered the most efficient for managing Type 1, I opt for “old school” insulin pens.

When I was first diagnosed two years ago my health care team and family insisted I get on a pump immediately. They presumed it would be the most effective way for me to manage my blood sugar while carrying on with my already busy lifestyle. After six months with the Omnipod insulin pump system I decided to go back to the traditional daily injection method and have stuck with it ever since.  Before I get into my decision for ditching my Omnipod I’ll share my opinion on the pros and cons of using a pump. The following is taken from my experience with the Omnipod which is a widely prescribed system. I have not tried other pump systems but much will apply to the variety of available models.

Insulin pumps are extremely accurate, capable of delivering doses in increments of 0.01 units. These devices are currently the closest available thing to an artificial pancreas. This precision greatly decreases the chances of hypo and hyperglycemic episodes and improves hemoglobin A1C levels in diabetics. The onboard computer calculates dosages based on settings input by an endocrinologist, eliminating much human error (as long as the user is efficiently counting carbohydrates). With a pump there is no need for multiple daily injections, just a single inset insertion every few days, diminishing the frequency of pain experienced. The device also gives warnings and reminders to check blood glucose levels, great for a newly diagnosed patient learning to cope with type 1.

Pumps eliminate the need for two different types of insulin. With the daily injection method, a short acting insulin is administered at meal times while a separate long acting insulin is given in the morning or before bed. A pump requires only one insulin, delivering a large bolus at meals and slowly trickling a basal rate over time. This slow release of insulin helps combat the dawn phenomenon, a spike in blood glucose levels upon waking, an issue that I have recently been facing. This method also prevents large fluctuations in blood sugar which can cause nasty mood swings. I have dealt with depression and anxiety due to this seesawing in glucose levels.

The Omnipod administers insulin through a remote pod about the size of a small computer mouse worn on the back of the arm or abdomen. The pod is bulky and very noticeable. When considering the Omnipod one must ask themselves, am I ready to have something attached to me all the time and for everyone to know I have diabetes? This was a serious issue for me. With little fat on my abdomen I had to wear the pods on my arms. I hated the attention they attracted in social situations where I usually felt comfortable. I received all sorts of eronious questions, many with good intention but I was bothered none the less.

The pods are controlled by a bulky PDM roughly the size of a smart phone. Carrying it around proved cumbersome and it emitted awful, obnoxious warning beeps when it was time to check glucose levels. These warnings often embarrassed me in classes, coffee shops and yoga sessions. I once had to get up and explain to a teacher that it wasn’t my phone going off during an exam.

An issue faced by many pump users is a build up of scar tissue around insertion sites. This can seriously affect insulin absorption putting the user at risk of diabetic ketoacidosis (DKA). This build up also makes inserting the catheter more difficult and painful. With insulin pens you have more options for injection sites, the stomach, thighs, back of arms and the rear end.

As I began to lose weight from eating healthier and working out I lost fat around my triceps. When applying my pods I would often hit the muscle causing a harsh shock of pain. I also had problems keeping the pods on while exercising or doing yoga. Sweat would cause the adhesive to lose grip and flexing my arm would often pull the catheter out. This can be countered with Skin Tac, a super sticky adhesive that is applied under the pod. Somehow, Olympic cross-country skier Kris Freeman (pictured below) keeps his pods firmly applied despite the lack of an ounce of fat on him. So it’s apparently possible to keep the pods on during strenuous activity but I had a lot of trouble. 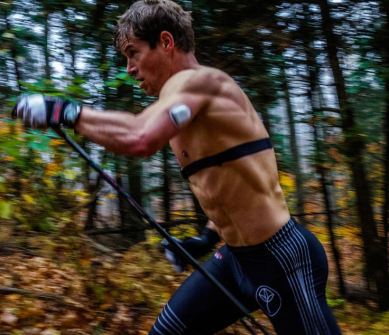 A big deterrent for many is the price of insulin pumps. They are undoubtedly the most expensive method for managing type 1 diabetes. I am luckily still under my father’s corporate health insurance so the cost wasn’t too much to bare but compared to insulin pens, pumps can really hurt the wallet. There are even some insurance companies that won’t cover pumps. The biggest expense for the Omnipod was the pods, which had to be changed every three days. As an added grief many of my pods failed on me! Insulet Corp. promised to replace every failed pod but it was a hassle having to call them every time one failed, which happened with alarming frequency. A few months after starting the Omnipod all of my pods were recalled which really threw up a red flag.

So why did I decide to ditch my Omnipod and revert to using insulin pens? It’s probably pretty obvious from my somewhat one sided analysis above. But when it comes down to it, an insulin pump just didn’t fit my lifestyle. I just couldn’t deal with having a piece of medical technology attached to me at all times. I got tired of pods constantly falling off and failing. I am a beach kid. I am always in the water surfing or on the beach sweating.  I spend most of my time in board shorts and a tank top so the pods were always visible. Those pods were a marquee that read “look at me I have diabetes.” While I commend those who don’t let that bother them, it bothered me. I got tired of having to constantly talk about my illness with everyone I met. Now I get to bring type 1 diabetes up at my leisure and don’t mind explaining it near as much as before.

With pens I feel more freedom. I can leave my diabetes kit nearby and not feel constantly connected to my condition. Diabetes is part of my life but it is not who I am. Now I am not reliant on sometimes faulty technology to manage my health. As long as my Freestyle glucometer has a battery (I carry extras) then I am good to go wherever, whenever. While traveling I can more easily manage the temperature of my insulin pens than I can the insulin in a pod. The Texas summer heat would sometimes render the insulin in my pods useless. Now I keep pens in a Frio cooling sleeve, safe from the sun.

I would never suggest anyone quit using their pump if they are happy with it and it is helping them better manage their blood sugar levels. These are just my opinions based on my personal experiences. My decision to ditch the Omnipod also came with the decision to maintain a strict low carb diet and practice yoga and exercise everyday. After quitting the Omnipod my A1C rose significantly to over 7.8. But since then I have lost 20 lbs, gotten in the best shape of my life and regained control of my A1C.

Insulin pumps are the pinnacle of diabetes management. But with diligence and persistence, similar control is possible without one.

What is your experience with an insulin pump? Do you use a model other than the Omnipod that you would recommend? Drop a comment below, I would love to hear your thoughts about pumps!

3 thoughts on “Pens vs. Pumps – Why I Choose Daily Injectons Over an Insulin Pump”